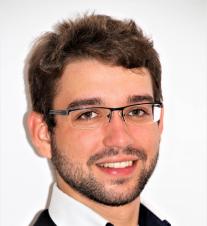 My passion for physics began in my childhood as fascination for space, stars and our planets. Since then interests for nature grew and working in a science-related field became my dream. After graduating in physics, I am currently working as a doctoral student at Bruker HTS GmbH that gives me the unique possibility to work closely at the intersection between academic sector and industry. My research and work currently focus on the optimization of HTS coated conductors (YBCO) in application for high field magnets. In my educational background I focused on future relevant topics like superconductivity and nuclear fusion.

Great opportunities of being part of the EASITrain project is an excellent education in the field of superconductivity, a very close integration into its scientific community and active networking with partners from the industry. My supervisors are Dr. Michael Eisterer (TU-Wien) and Dr. Alexander Usoskin (Bruker HTS GmbH).

What is the key question you try to address?

Superconductivity is a property of many materials at very low temperatures in which no resistance to current flow can be measured. With the discovery of the ceramic high temperature superconductors (HTS) materials that transition to the superconducting phase at temperatures above the boiling point of liquid nitrogen at around 77 K were found. This is significant as cooling to very low cryogenic temperatures is generally rather expensive as it typically requires valuable liquid helium as a coolant.

Superconductivity is a quantum mechanical phenomenon and closely related to magnetism. The maximum resistance-free current (critical current) is depending on temperature and the properties of an externally applied magnetic field. Generally, lower temperatures cause higher maximum currents.

The capability of transporting very large superconducting currents at lower temperatures of ~10 MA/cm² at 4.2 K makes yttrium barium copper oxide, YBCO, a promising candidate to be used in high field magnets. These conductors are commercially manufactured and available as tapes with a length up to 600 m.

The key question of my study is the development of a characterization method that directly measures the critical current of long tapes in scan modus. The measurement is preferably performed at 77 K by using feasible and easily available liquid nitrogen as a coolant. It is aimed to predict the superconducting properties from the obtained data at 4.2 K, which requires a correlation function.

The new characterization tool will save helium as it is a limited resource on earth and finally lead to an increase of the defect-free length of the superconducting tapes.

Which are the main tools that you are using in your research?

In my experimental studies, I investigate short samples of the long-length tapes in different magnetic fields and temperatures. The samples are typically connected with current and voltage contacts, cooled down in a cryostat or liquid nitrogen bath and exposed to different magnetic fields. The critical current is typically determined when the voltage signal in the sample exceeds a defined criterion during the current ramps up.

The first test bench developed at Bruker is a sample holder on which two permanent magnets can be placed. The sample is introduced in a 1 mm gap between these magnets and mounted on the holder. The sample is placed in a liquid nitrogen bath and the critical current determined.

Additionally, an in-house designed electromagnet, that can produce a magnetic field above 3 T in 1-3-second-long pulses, was used to characterize several samples.

For studies that required a broader range of magnetic field and a variation of temperature, a gas-flow cryostat from the low temperature lab at the Atominstitut in Vienna was used. In these experiments the samples are exposed to homogeneous fields up to 15 T.

Can you describe the latest results?

Short samples of the long-length tapes were characterized in the pulsed 3 T split electromagnet. The around 20 cm long samples can be placed in a 2 mm tape channel between the coils and tightened with a spring on one side. Voltage and current contacts are soldered to the sample. The magnet is fully immersed in liquid nitrogen when operated and current loads of 700 A produce a field of 3 T. A picture of the magnet during operation and a scheme of the experimental setup is shown in figure 1(a) and 1(b), respectively.

Figure 1(a) Pulsed 3 T electro magnet immersed in a bath of liquid nitrogen. (b) Scheme of the experimental setup.

A power supply is connected to the tape to load it with DC currents up to 10 A. The DC current dependent voltage drop between the potential contacts during the magnet pulse is measured.

The flux density in this magnet is not distributed homogeneously i.e. the highest magnetic field can be found in the ~3 cm long central region in the tape channel. We observe a monotonously decreasing field from the center towards entrance and exit of the slit.

The aim of this experiment was to develop a model that can describe the behavior of a tape exposed to nonhomogeneous magnetic fields.

The key features of the developed model are an advanced parametrization of the critical currents at 77 K in different magnetic fields and the integration of the electric field in the tape during the pulse along the distance between the voltage contacts.

Figure 2 Voltage drop U between potential contacts depending on the magnetic field B for different current loads on the sample. Dots indicate the experimentally obtained data and calculation via the developed parametrization within the extended alpha approach (lines) shows good agreement. I0 is a fitting parameter of the model.

Which are the next steps?

The initial defined goal foresees the development of a tool for continuous critical current measurements of long tapes. In order to decrease the critical current to a sufficiently low level where continuous measurement is possible, the tape is guided through a magnet exposing the tape to a flux density of 2-3 T. The above described experiment marks an important milestone as it simulates a sample that is introduced in a magnet zone and measured “outside” the magnetic field.

The usage of a permanent magnet has the advantage as its field is constant and consumes no power. On the other side, direct proportionality of the current through the electromagnet to the produced magnetic field allows a high flexibility for test conditions. Next experiments will investigate tapes which are exposed to a time-independent field of a permanent magnet. During this experiment, the sample is moving through the magnet which requires rollers as potential and current contacts.

Can you think some possible applications?

The scope of my project is to develop a new characterization tool for quality control of long HTS tapes. The goal is to increase the defect-free length of the tapes and reduce the necessary amount of helium in quality control measurements.