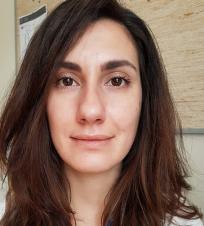 Fellow position at the Central Cryogenic Laboratory at CERN funded by MSCA EASITrain ITN and PhD student at University of Siegen/Helmholtz-Zentrum Berlin (HZB). My research project focuses on the establishment of a permanent test station to be used by CERN to measure parameters such as critical temperature, critical field, critical current density, penetration depth, of superconducting (SC) thin films produced for SRF applications.

The materials under investigation are mainly niobium and A15 compounds. The deposition methods are High-Power Impulse Magnetron Sputtering (HiPIMS) and DC Magnetron Sputtering (DCMS). In the context of my PhD, I will make use of the data collected with the test station at the Cryolab to study the correlations between the deposition parameters, the structural features and the SC performance of the thin films produced at CERN. The analysis of the results will take place in collaboration with University of Siegen, HZB (Germany) and INFN-LNL (Italy) within the EASITrain programme.

The FCC Study is an international collaboration investigating the feasibility of new circular collider pushing the intensity (FCC-ee) and energy (FCC-hh) frontiers, in the search for new physics beyond the Standard Model.

Within the FCC study, extensive efforts are ongoing on the R&D side towards the establishment of the advanced technologies needed for the construction of a particle accelerator capable of reaching energies beyond the state of the art machines, such as the LHC. Currently, one major challenge is represented by the development of new superconducting radio-frequency (SRF) cavities capable of providing higher accelerating fields, and one of the options considered is the production of superconducting (SC) film coated copper cavities. Among the several options, A15 compounds are being explored as coating materials while the focus at CERN is on Nb3Sn and V3Si.

The production of these materials, especially in the form of thin films, is nothing like a simple nor a well-established process, and it requires the joint efforts of experts from many fields, from Material Science, to Cryogenics, to Accelerator Physics to Superconductivity. To assess the quality of the SC films on their substrate and to investigate how the condition of the substrate can cause deviation of their behaviour from what is observed in bulk materials, it is important to study their physical and thermal properties such as the critical temperature Tc.

To meet this goal, I have been working on the preparation of a test station at the Central Cryogenic Laboratory at CERN, allowing to perform contactless, inductive measurement of the Tc of A15 thin film samples deposited on copper substrate produced. As proof of principle, I performed the measurement of the critical temperature of bulk niobium (shown in the figure below), and after started analysing newly produced thin film samples while the test station is currently being upgraded and optimized.